The founding of Dresden Kinsmen Club as told by... 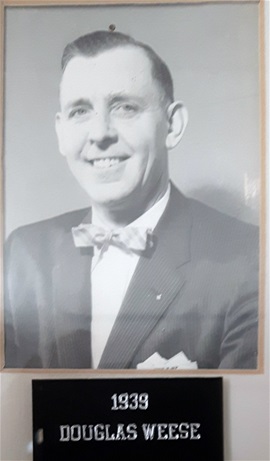 The late Douglas Weese was a founding member and charter president of the Kinsmen Club Dresden.

The first meeting was held in March 1939 with twenty young men present.

Here is the rest of the story as written by Doug Weese at my request. Originally I had asked Doug to attend a Kinsmen meeting at a time in 1979 when I was president. He agreed to be guest speaker. Later, however, Doug called to inform me that he was unable to attend, but said he would  provide a written detailed accounting of how the Dresden Kinsmen Club was formed.

The following is his report.

The subject I want to say a few words on is the organization of the Kinsmen Club of Dresden in the Town of Dresden.

I wanted to talk on this subject at the meeting when Past Presidents were presented with their plaques but I was too emotional I guess or you could call it "chicken-hearted". The only words that I could say, with out breaking down, were thanks and that I was so proud to be in the group.

In looking over the photos of the past presidents on the wall it brings back fond and happy memories to my mind and I might add, deep sorrows for the past presidents who have passed away and not only for them but for the members of the club who did not make the President's chair but certainly helped make this club what it is today.

One November night in 1938, three members of the Wallaceburg Kinsmen Club, named Lynn Ayres, Fred Leach and Floyd Harrington introduced themselves to me and told me what they were interested in. We had a long talk in my service station re the organization of a Kinsmen Club in the town of Dresden. After closing the station we dropped into McKays restaurant and had lunch. I introduced them to Morley McKay who thought that forming a Kinsmen Club in Dresden would be an excellent idea. I am sorry to mention that Morley never became a member.

About two weeks later, Morley and myself were invited to a Kinsmen meeting in Wallaceburg held at the Mirwins Park Hotel. The guest speaker for the evening was Banty Bantick who was at that time the general secretary of the Kinsmen Club of Canada. We were treated royally and enjoyed every part of the meeting. Before closing they asked me to say a few words. I thanked them for a very enjoyable evening and suggested to them that since it was near Christmas time they contact us early in 1939 and perhaps we could get serious in forming a Kinsmen Club in Dresden.

In March 1939 I received a phone call from Lynn Ayres and he asked me to contact as many young men in the town and community who I thought might be interested in forming a club here. This I did and was personally surprised with the enthusiasm I received. However, there were a few a little skeptical, in fact the late Bob Sayers, Canadian Bank of Commerce manger, felt that the town could not afford a service club but a few years later he joined the club and turned out to be an excellent member and further you will see his name on the wall as a Past President.

Lynn asked me to send him a list of the young men with their addresses who were interested and to contact the hotel manager to see if he would accommodate us for a organization meeting. He was very co-operative and requested that we give him four or five day's notice re the date and the number to attend.

Lynn set a date and one week before this meeting a bulletin was sent daily to every name on the list, from the Wallaceburg Club. Through this effort I believe we had 100% attendance. I took the liberty to invite the late Robert Brandon to the meeting. Mr Brandon was a very civic minded person and I was sure that he would give us a lift. I was not wrong as he did an excellent job and I think that his talk put the "icing on the cake."

A dinner meeting was held with Lynn Ayres the chairman. A motion was passed to make myself President, Maurice Sullivan secretary and Wilson Clark, Treasurer pro tem. That night 20 men joined the club and before the weekend 12 more. We were in business. We then contacted the ladies of the Heather Club and asked if they would cater to us and also if we could hold our meetings in the Sunday School Hall of the Presbyterian Church. They co-operated 100%,

At our second meeting, Doug Bell, Crown Attorney for the County of Kent and Past President of the National Kinsmen Club of Canada, was the guest speaker. After the meeting the guest speaker and several members of the Wallaceburg Club and the executive of our local club met to make plans for Charter Night.

A month or so later in the old town hall, we were presented our charter by the governor of our district, Mickey McKee. To me and I believe all members of the club, charter night was more or less of a dream. The Hall was packed. The ladies of the Heather Club catered for us and what a job they did.

The visiting club members, "most of them loaded, raised proper hell" if  you can call it that. The members of the Dresden Club felt sorry for the ladies and I believe, in turn, felt sorry for us. After the meeting all the members of the Dresden Club went straight home, including myself and personally, I felt that this was the end of the Kinsmen Club of Dresden, and I am sure that other members felt the same, in fact three of the members resigned over it.

A few days later I contacted Lynn Ayers and requested a meeting with him and a few members of the Wallaceburg Club. At this meeting, I told him how disturbed we were and after talking for a couple of hours was informed that most all charter nights were the same and it was their feeling that if the charter night could ride out this storm, it is bound to be a successful club, and it turned out that they were a 100% right.

Next year the Dresden Kinsmen Club will be celebrating their 40th anniversary. Over these years the Kinsmen Club has been a great asset to the town of Dresden and Community.

An in closing, President Ted, it is a great honour to be President of this club and with this honour comes many problems and headaches but it is all worth while and after your turn is over with I am sure that you will remember my words.